“…it remains to be seen if the wheel will catch on in the business world, where people use computers for actual work, and not just d*cking around…” Sign me up!

Estimated cost of the 2008 presidential campaign and congressional races: $5.3 billion
Estimated amount of money spent in 2008 on Halloween candy, costumes, and decorations: $6 billion 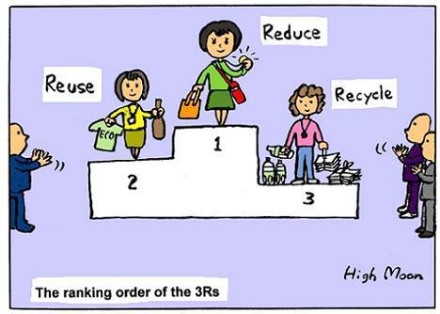 This cartoon from Japan for Sustainability succinctly summarizes the importance of “the 3 R’s” in ranking order. Too often people are focused on Recycling. Reducing is much much more important: it doesn’t take much common sense to figure out that you make a much bigger environmental impact by simply using less. What a concept!

“It’s a bit odd that we give the Undecided Voter such a privileged place in American elections. Because from a civic standpoint, few creatures are as contemptible. This election has dominated every form of American news media for the better part of two years. Newspapers, magazines, networks, cable, radio, blogs, people on street corners with signs — it’s really been rather hard to miss. Further, it pits two extremely different candidates against each other. Whether your metric is age, ideology, temperament, race, funding sources, healthcare plans or Iraq strategies, it would be hard to imagine two men presenting a starker contrast.

But despite this, the Undecided Voter wakes up each morning and says, in effect, “I dunno.” And the political system panders to him. Undecided voters are believed to be the decisive slice of the American electorate, so they get the debates and the ads and the focus groups (assuming, that is, that they live in a battleground state).” -Ezra Kelin, L.A. Times

I would go so far as to say that, despite the efforts of the “get out the vote” groups, people who aren’t familiar with the issues and people who don’t quite understand the differences between Obama and McCain and their positions simply should not vote. To leave important political and policy decisions to people who, in effect, wake up on Election Day and decide “hmm…I dunno…I guess I’ll vote for X” is absurd beyond belief.

The new Cadillac Escalade hybrid “preview” commercial has probably the most annoying line in recent TV history: “you know what they should hybrid…” You know what they should hybrid!? Did someone not realize that hybrid isn’t a verb? Or did someone think that using “hybrid” as a verb would somehow invoke some cool factor enough to overcome the fact that it just sounds stupid?

Hopefully a few years from now, this will be funny:

I NEED TO ASK YOU TO SUPPORT AN URGENT SECRET BUSINESS RELATIONSHIP WITH A TRANSFER OF FUNDS OF GREAT MAGNITUDE.

I AM MINISTRY OF THE TREASURY OF THE REPUBLIC OF AMERICA. MY COUNTRY HAS HAD CRISIS THAT HAS CAUSED THE NEED FOR LARGE TRANSFER OF FUNDS OF 800 BILLION DOLLARS US. IF YOU WOULD ASSIST ME IN THIS TRANSFER, IT WOULD BE MOST PROFITABLE TO YOU.

I AM WORKING WITH MR. PHIL GRAM, LOBBYIST FOR UBS, WHO WILL BE MY REPLACEMENT AS MINISTRY OF THE TREASURY IN JANUARY. AS A SENATOR, YOU MAY KNOW HIM AS THE LEADER OF THE AMERICAN BANKING DEREGULATION MOVEMENT IN THE 1990S. THIS TRANSACTIN IS 100% SAFE.

THIS IS A MATTER OF GREAT URGENCY. WE NEED A BLANK CHECK. WE NEED THE FUNDS AS QUICKLY AS POSSIBLE. WE CANNOT DIRECTLY TRANSFER THESE FUNDS IN THE NAMES OF OUR CLOSE FRIENDS BECAUSE WE ARE CONSTANTLY UNDER SURVEILLANCE. MY FAMILY LAWYER ADVISED ME THAT I SHOULD LOOK FOR A RELIABLE AND TRUSTWORTHY PERSON WHO WILL ACT AS A NEXT OF KIN SO THE FUNDS CAN BE TRANSFERRED.

PLEASE REPLY WITH ALL OF YOUR BANK ACCOUNT, IRA AND COLLEGE FUND ACCOUNT NUMBERS AND THOSE OF YOUR CHILDREN AND GRANDCHILDREN TO [email protected] SO THAT WE MAY TRANSFER YOUR COMMISSION FOR THIS TRANSACTION. AFTER I RECEIVE THAT INFORMATION, I WILL RESPOND WITH DETAILED INFORMATION ABOUT SAFEGUARDS THAT WILL BE USED TO PROTECT THE FUNDS.

YOURS FAITHFULLY MINISTER OF TREASURY PAULSON


Law professor James Duane lectures on why you should always exercise your fifth amendment rights and never talk to the police, regardless of your guilt or innocence.